Two days ago we arrived downtown Sydney. It is such a busy little city. Somewhat like Toronto, but such pretty architecture everywhere! We haven’t been able to do any of the touristy things yet; we just walked around a small portion of the city.

There are these beautiful purple trees that I have become obsessed with. They are all around the city, and they are just so bright and pretty. They also smell amazing. I can’t stop taking pictures of them. I’d like to take one home!

After about a week of searching we found our first Kangaroo…

unfortunately it was just on the menu of our hostel. 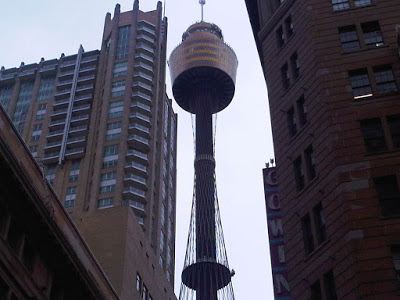 Here is a glimpse of the Sydney Tower. (We hope to go up it one day)

Our first night in Sydney we stayed in this really nice hostel called Sydney Central YHA. It had a rooftop pool, cinema, restaurant, huge kitchen, basically everything you could ask for in a hostel. It was extremely nice. 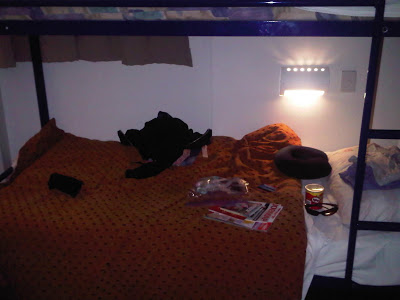 Our second night we had to move out quickly as our hostel was booked for the next night, and we were unable to stay there another night. So we sat and called about 15 different hostels before we could find one that had vacancy. Finally we found one, and we had to call a cab and lug ALL of our luggage to it (Kristen’s entire life)…and then lug it up 3 flights of stairs.

As soon as we arrived, we made sure to book for a full week, so we didn’t have this sort of problem again. Now this hostel is…well not as “classy” as what we have been used to for the past 5 nights…we are now located somewhat in the “entertainment” district.

This is what surrounds us…

Last night we went to a club called “The Bank” which was extremely far away from our hostel and took a whole 1.5 seconds to get to. (It is RIGHT beside our hostel) For being in such a “classy” neighbourhood, this club was really nice. It was a VIP night and we were lucky enough to party with the like of Weeman from Jackass, and Carmen Elecktra. It was a pretty exciting experience…who knew we could find homegrown celebs across the world? 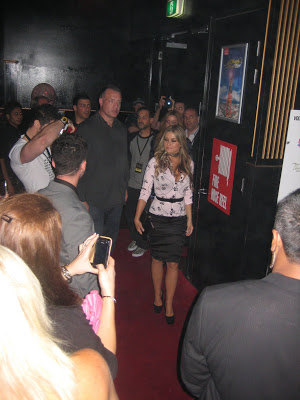